Between volunteering at TCAF and with the Hand Eye Society and visiting with a friend passing through town, we spent some time this weekend at Ryerson’s Science Rendezvous, an annual science fair and festival taking place across Toronto, playing with the science of zombies. 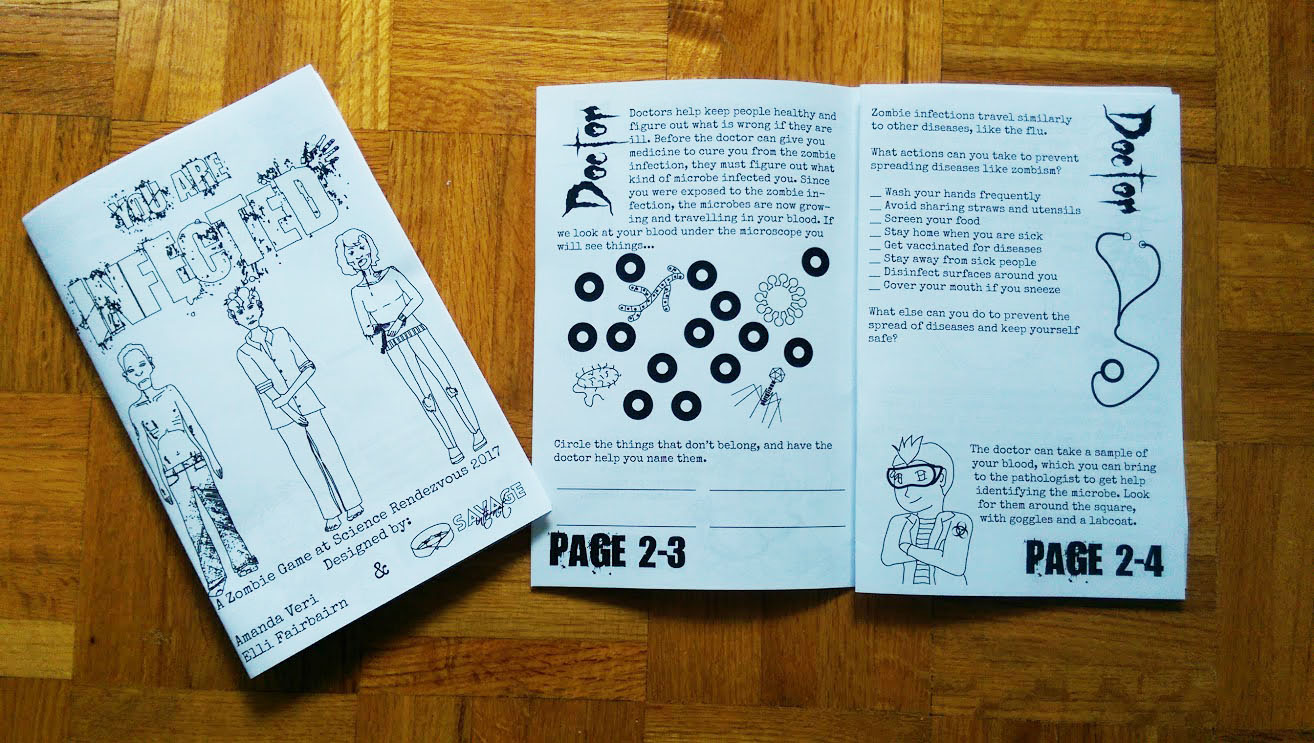 A couple months ago, we heard that two members of SciCommTO, Toronto’s meetup for science communicators, were working on a Pandemic-style board game showcasing a zombie infection on Prince Edward Island. They had used the game to teach the basic principles of disease transmission, as well as emphasize the differences in infections caused by fungi, viruses, and bacteria.

Now, they wanted to bring the game and information to a wider audience. We met up with Amanda Veri and Elliann Fairbairn to think about how that might work. The main audience for Science Rendezvous is kids ages 4-12, which was very different from the audience their board game was designed for (high school kids and adults). The game also had to be made significantly shorter, so that it could hold the attention of a hypothetical family trying to navigate Yonge-Dundas square with science experiments and science magic shows on all sides of them. In addition, the game couldn’t really require players to sit down to learn rules, and it had to be playable outdoors.

This list of requirements rang a bell for us. On our recent drive across the US and Canada, we were lucky enough to spend time in several National Parks and -Monuments in both countries. In the US, the National Parks Service runs a junior ranger program for folks visiting: you ask for a booklet at the beginning of your visit, then you carry it around the park with you and complete activities as you hike, listen, learn, and explore. We went all the way through the booklets for Devils Tower National Monument and Yellowstone National Park. 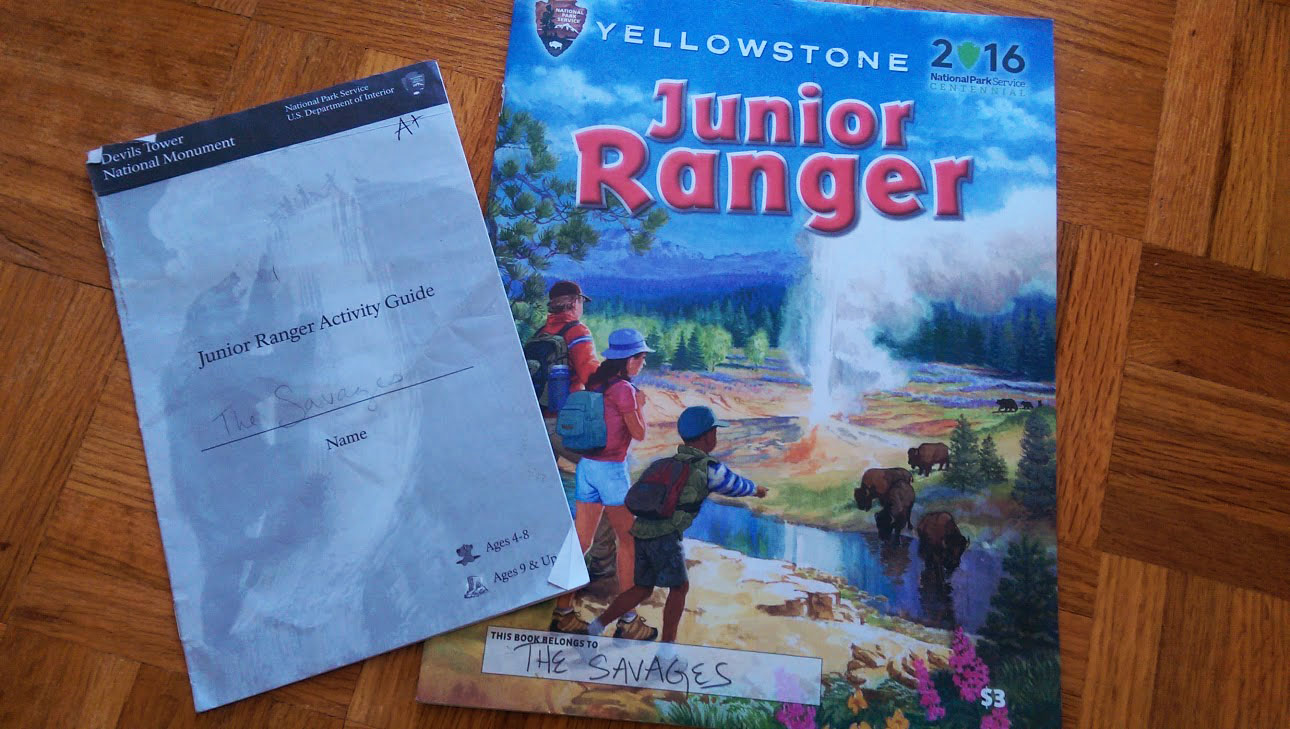 These booklets have a range of activities, and they are built to accommodate multiple age groups within the same booklet. In general, older kids (and adults!) need to complete more activities than younger ones, and their activities are more complex. A 4-year-old might dance like a leaf, while a 12-year-old might read a few paragraphs and fill in a crossword puzzle. At all ages, junior rangers must go on a hike and listen to a ranger talk while at the park.

We all agreed that this would be a great basis for the kind of experience we wanted to develop. The final product has a collection of activities which are completed at pre-defined stops, where volunteers keep the game moving with some hands-on activities and help participants complete the related booklet pages.

Our game has four stops: zombie, doctor, pathologist, and researcher. Players are infected, then go through the process of identifying their infection type and helping develop a cure for it.

Zombies roam around the event, searching for kids and families to “infect” with zombism. Each zombie has a collection of activity booklets, which are coded to let other volunteers know which kind of infection each person has. When a zombie infects a player, they note the time (players have only 30 minutes to complete the game before they turn into zombies… forever!). Players take notes about the zombie: how it infected them, how it is behaving, and what it looks like. They are then encouraged to seek out a doctor to help them figure out what is wrong. 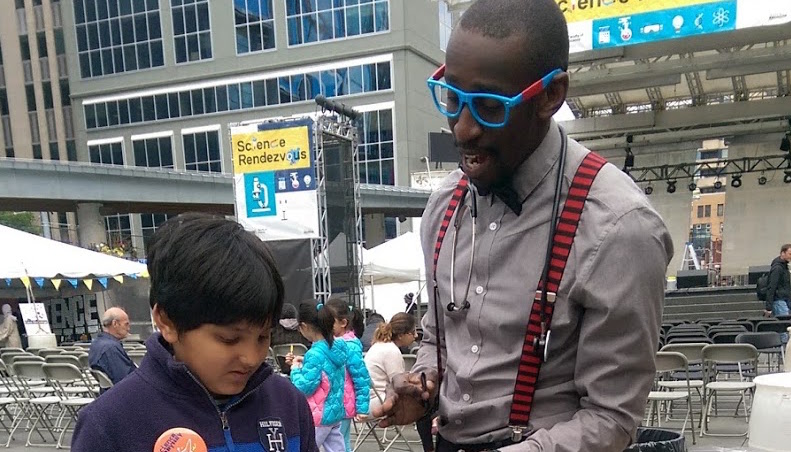 The doctor helps players “take a blood sample” so that they can identify things that don’t belong. In this case, players learn what a virus, bacterium, bacteriophage, and fungal spore look like: they also find out that one of these three things is causing their infection and learn more about how to prevent the spread of infections. 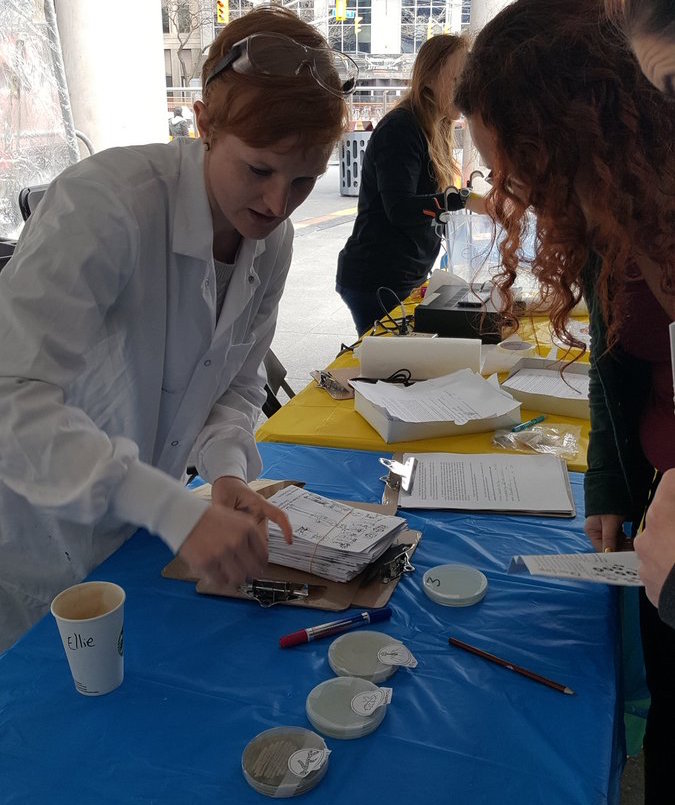 A pathologist can create a culture of disease agents. Our pathologist takes the player’s “blood sample” and gives them back a culture showing what that sample would look like when grown. For this, Amanda arranged real cultures of viral, bacterial, and fungal agents, which we sealed for the protection of participants (they were common agents, like bread yeast for the fungal agent, so this was mainly precautionary and not strictly necessary). Participants then had to match their culture to example cultures to determine which kind of infection they had. 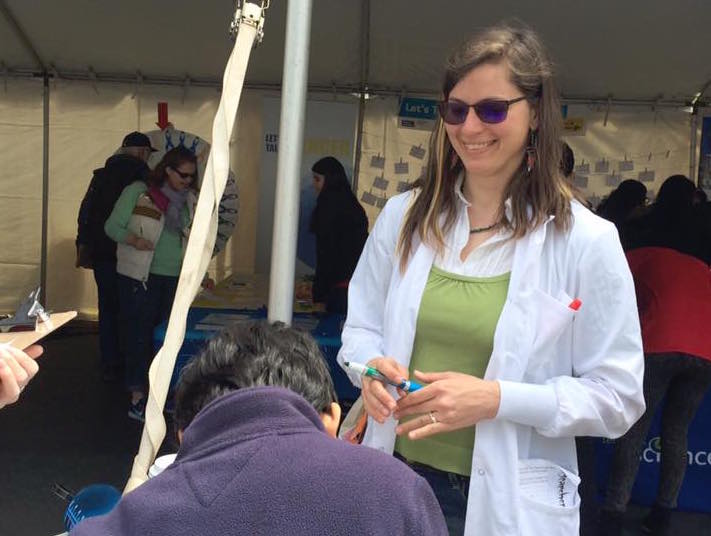 With all the info about their infection in the bag, players scoot over to the researcher who helps them create a cure. In order to create something effective, it is necessary that players have correctly identified their infection, since a cure for a fungal infection does not work on a viral or bacterial infection! Players learn how drugs are designed, and complete a word search for new vocabulary learned in the course of the game.

Once players get their cure, they again note the time. If they have completed the game within 30 minutes, they are free! The researcher writes a big “WIN” in green letters, certifying that they are healthy and no longer infected with zombism. However, if not… players are now zombies! Either way, everybody gets candy. 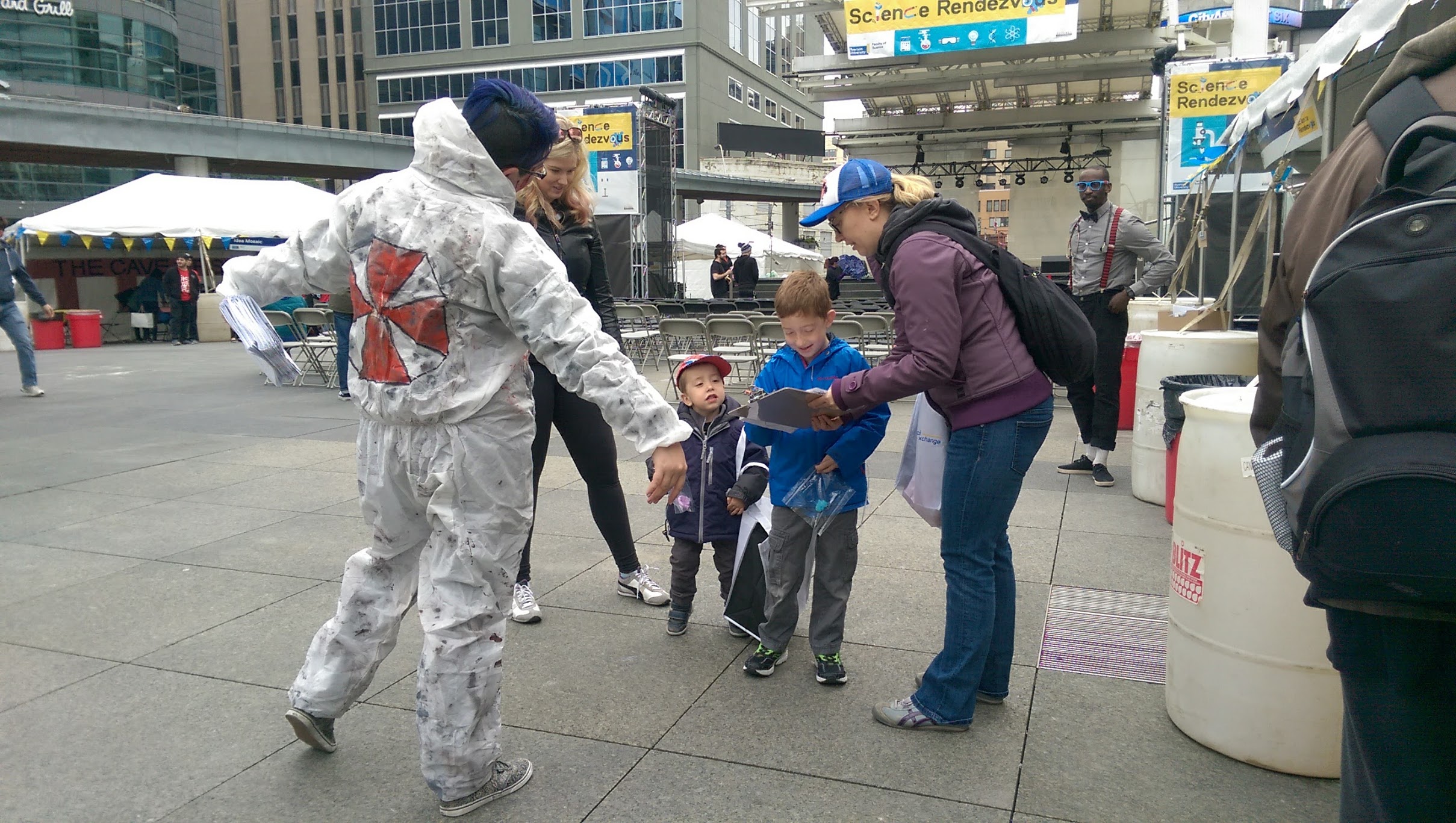 A final pair of pages in the book can be completed by participants after they’ve gone home. It encourages them to think about what they would want in case of a real zombie infestation, in terms of supplies, shelter, and skills.

We learned a lot over the course of the day. A few of the most important lessons were about group/family dynamics, keeping things from getting scary, pre-game organization, activity design, and “advertising”.

Most of the people at Science Rendezvous showed up as families. The people who played our game ranged from 4 to 60, though most of them were under 12. Often the younger ones showed up with Mom and/or Dad, and it was important to get everyone involved in the activity, but not too much. We started to take the tactic of kneeling down to do activities with the kids, since then they were more engaged with them and it kept Mom and Dad from being tempted to do the activities for them. We also sometimes saw kids who totally split off from their parents to play the game; this was a surprise to us, but given that our locations around the square were pretty obvious, it was never a problem.

Keeping things from getting scary

During the beginning of the day, some kids got totally scared off from playing the game because our zombies were too realistic. The zombies developed a strategy: first they asked kids if they wanted to play a game, then they would act like a zombie and bite them, and then “change back” into a non-scary person who would help them start the activity.

Since everyone who performed today was a volunteer, we didn’t really have a chance to train or even go over the game totally. In the first part of the day, many people “lost” (i.e., became zombies permanently) because we had not properly set up the pathologist’s station beforehand. The agar plates were very challenging to correctly identify visually, and we ended up labelling them with illustrations.

One of our activities is a word search, which we based off of the Yellowstone Junior Ranger book. It didn’t take us long to realize that the word search takes much too long for our game; we originally intended to have people find from 10-20 words depending on their age, but cut it down to 3-8 words to keep their interest. The Yellowstone book, of course, was designed for kids to do as they rode in the car around Yellowstone, which they must do for hours and hours in order to see all the big sights in the park. In that case, a really long activity was a bonus rather than a problem. We didn’t think about that when we borrowed their design, so we had to change some things on the fly.

Another fun thing for activity design would be to have an “accomplice package” along with the kids' game; their parents were in general just as into it as the kids were, but perhaps we could supply some more challenging activities for them to do alongside their kids!

Our goofy outfits made it more fun for us to run the game, in addition to making it more likely that people would walk up to us and ask what the heck we were doing. Definitely a plus in this situation!

People of all ages and kinds were really excited about the game. We had praise from parents, educators, kids, and adults who played even without having kids. One kid even went through the game twice. A security guard working at the event walked up to one of our zombies saying, “I heard your game is really hard… can I play?” At the end of the event when we were packing up, we were begged by a kid who had heard about “the zombie game” from someone else and desperately wanted to play. Of course we humoured him.

Overall, it was a satisfying day. While the game didn’t take a super long time to put together, and it could still use some tweaking, it was definitely well-received. Perhaps we’ll join the festival again next year. :)

Want to try out our game—even though you didn’t make it to Science Rendezvous—, or would you like to run Zombie Rendezvous at a similar event?

Take a look through our booklet, and feel free to use it! We’re hereby licensing it under Creative Commons CC-BY-NC-SA 4.0, which allows you to reuse it for non-commercial purposes, and even make changes to it, as long as you cite us as the source and allow other people to adapt your booklet in the same way. Here’s a printer-friendly version of hte booklet, with pages flipped for proper printing and to conserve paper. 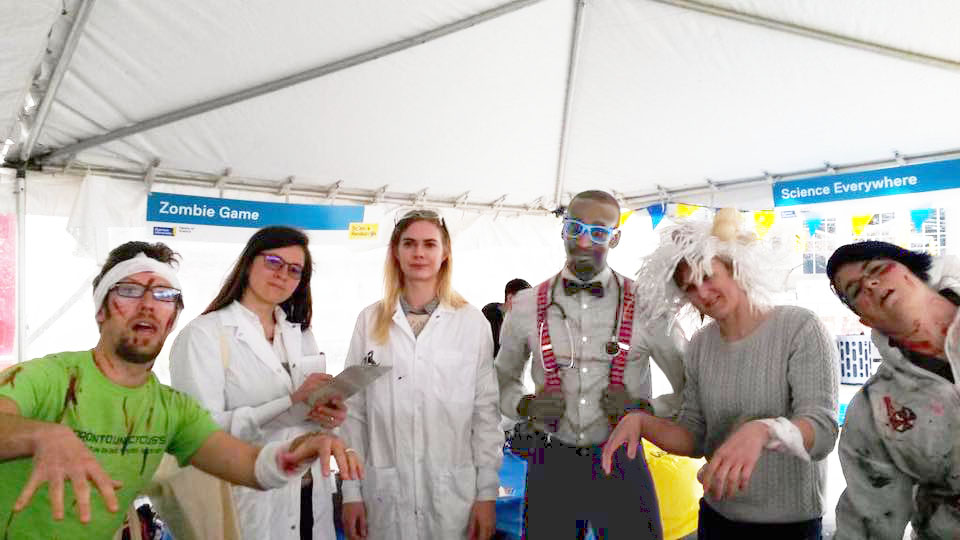